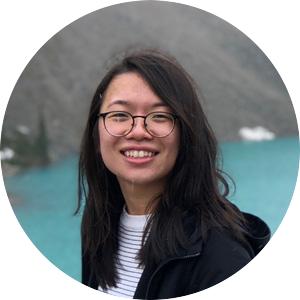 Elizabeth Y. is a third-year student from Stratham, New Hampshire, majoring in Economics. Besides helping out the Office of College Admissions, Elizabeth is also involved with Women in Business and her sorority, Pi Beta Phi. She loves watching sitcoms in her spare time, running, and visiting her friends in rotation across campus.

Last spring, I was lining up to see all the dance groups on campus perform at the Reva and David Logan Center for the Arts, when I spotted one of my friends piling chairs, headboards, and various other scraps of furniture on top of each other in the courtyard of the Logan Center. I learned that this was for a TAPS (Theater and Performance Studies) class and I resolved to take a TAPS class as well, as soon as I could.

This past winter quarter, I took TAPS 10200, Acting Fundamentals, partly because it fulfilled my general education requirement in the Arts, partly because I have been curious about TAPS ever since last spring, and partly because I was excited to try something so completely out of my comfort zone. The last experience I’d had with acting before I took this class had occurred almost a decade ago, when I played one of the dogs in The Aristocats for my fifth grade class production. Needless to say, I had been out of practice for a while. I had no idea whether or not acting was something I could pick back up (or even if I knew how to in the first place), so I walked into class on my first day a little unsure of how things would go.

The first thing I noticed was the classroom itself, located on the seventh floor of the Logan Center. It looked like a dance studio, with a marley floor, mirrors, and a floor to ceiling corner window looking out at the city. Serene music played in the background as we shuffled in, and our professor asked us to take our shoes off. We began by standing in a circle, tossing a bean bag around to learn each other’s names. It was so different than any other class I had taken at UChicago, right from the get-go. We sat not in chairs at desks but on the floor (there were desks and chairs in the classroom, but they were rolled away and stacked up). We moved around, and instead of engaging with each other intellectually, we engaged with each other physically, using the actual air between us to establish and reveal relationships to our audience (imagine the multitudes of difference between a scene where two characters argue up close rather than far away from each other).

After we had warmed up, we were assigned partners and given scripts with no context that we had to act out. My partner and I received the following script:

A: You weren’t going to tell me.

A: But you weren’t going to tell me.

B: I was waiting for you to ask.

A: You knew I would ask.

My partner and I imagined that our characters were two sisters meeting in a diner in Southern California in the 90’s, and Person B, my sister, had gotten test results back for an illness that she was unwilling to tell Person A, me, about. After we rehearsed our scene for the class to see, my professor pushed us to consider our objectives and the actions we took to achieve our objective. What did I, Person A, do to get Person B to change her answer from, “Oh. No.” to “Well…yes.”? We rehearsed the scene again, while I tried to do whatever I could non-verbally to get my partner to change her mind and divulge the information to me.

I knew, as soon as our first class ended, that I had absolutely made the right decision in choosing to take Acting Fundamentals. I had had so much fun that first class.

That trend continued on throughout the quarter. Acting Fundamentals met once a week, for a 170 minute class. We began with warm ups and acting games, to wake us up and make us feel more comfortable with each other. This entailed breathing exercises, a game that only involves the sounds: “yah,” “pah,” and “ziggy ziggy ziggy”, or passing an imaginary ball around, that we could shape and move as we wish. Then we moved into what we were working on that day. Sometimes, we presented scenes we memorized for homework to the class, or we discussed a play we read the night before. We usually moved through a variety of different tasks, taking breaks in between, so the nearly three hours went by fast.

We also saw two productions outside of class. We saw Photograph 51, a play about the role Rosalind Franklin had in the discovery of DNA’s structure, at Court Theatre, right on campus. Then we saw Pipeline, a play about the issues of the “school-to-prison” pipeline for underserved communities, at Victory Gardens Theater. I enlisted one of my friends to watch Pipeline with me, and having neither seen nor read the play before, she was caught off guard and ended up being so moved by the play that she began crying.

Acting Fundamentals was such tremendous fun last quarter. Even though we never created a giant furniture pile in the courtyard of the Logan Center, my class still changed my expectations of what a class and what learning can be.