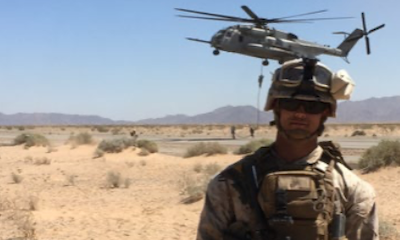 Originally from south central Pennsylvania, Zane served eight years as an Infantry Rifleman in the U.S. Marine Corps. He was stationed at Camp Lejeune, NC where he was assigned to 3rd Battalion, 2nd Marines and 3rd Battalion, 6th Marines. Earning the rank of Sergeant, he served as an Infantry Squad Leader, Scout Sniper Team Navigation, and a Current Operations NCO for Marine Special Operations Command-East. 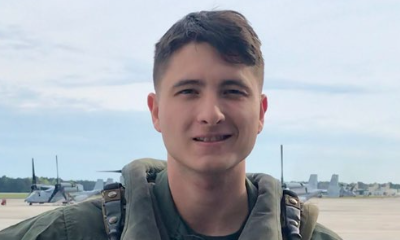 Robert was raised in Columbia and Charleston, South Carolina. He enlisted in the U.S. Marine Corps as an Aircrewman and after subsequent training was later assigned the specific designation of Crew Chief for the V-22 Osprey. Upon completion of his training, Robert was assigned to Marine Helicopter Squadron One where he crewed Ospreys to support presidential lifts across the U.S. 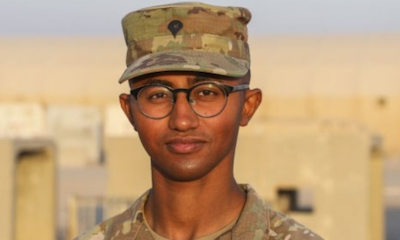 Natnael was born in Bahir Dar, Ethiopia, but spent most of his life in Dallas, Texas, before moving to Pennsylvania. After a year of studying computer engineering at the University of Pittsburgh, Natnael decided to take a break from college and joined the U.S. Army as an Infantryman. During his three years of service, Natnael went on two rotations to Poland and deployed to Kuwait. 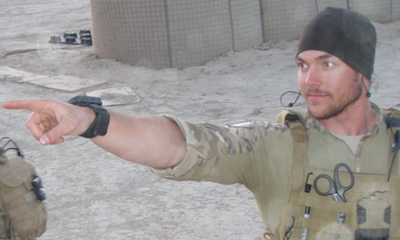 Originally from Louisiana, Shane moved to Panama with his family as a child before returning to live in North Carolina. Shane enlisted in the U.S. Army out of high school where he served for eleven years as a Special Forces Medical Sergeant, ultimately earning the rank of Sergeant First Class. Shane deployed to Afghanistan, Columbia, and Honduras while stationed at 7th Special Forces Group (Airborne). 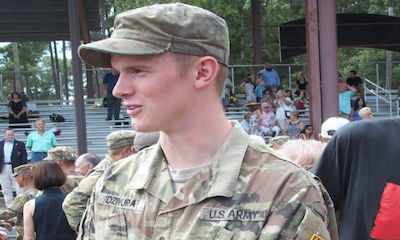 Quinn grew up outside Atlanta where he enlisted in the U.S. Army out of high school. He completed Basic Training, Airborne School, and the Ranger Assessment and Selection Program before being assigned to the 3rd Ranger Battalion, 75th Ranger Regiment. While assigned to his unit, Quinn deployed to Afghanistan twice in support of Operation Freedom Sentinel and graduated the military’s premier leadership course – the U.S. Army Ranger School in 2018. 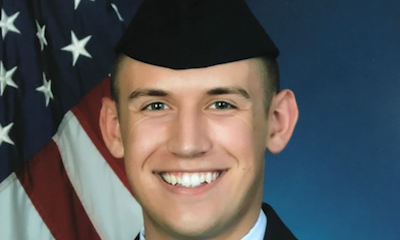 Cayden grew up in Sparta, Wisconsin, where he joined the U.S. Air Force out of high school. He served two years at Royal Air Force Base Mildenhall in England as a Cyber Security Technician where he took lead in modernizing the United Kingdom’s Inter-Continental Ballistic Missile systems. He was then stationed at Hurlburt Field, Florida, where he secured and managed the Air Force Special Operations Command’s network. 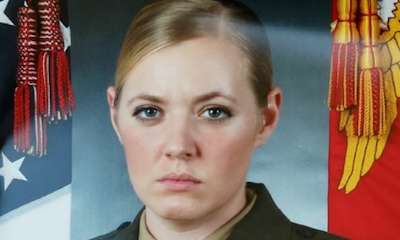 Abigail was born and raised in Massillon, Ohio. She enlisted into the U.S. Marine Corps in 2014 where she served in Air Support Operations. Abigail spent most of her enlistment in Cherry Point, North Carolina, at Marine Air Support Squadron 1. Outside of the regular duties of her MOS, she led and organized multiple squadron and base-wide events for hundreds of Marines and their families. 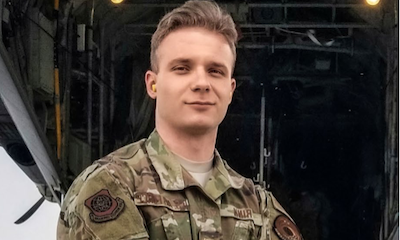 Nicolas grew up in Verona, Italy, where he first read about the University of Chicago. In 2017, he enlisted in the U.S. Air Force to work as a Telecommunications Technician. During his three and a half years of active duty, Nicolas repaired first responder radios and later joined the aeromedical evacuation teams. 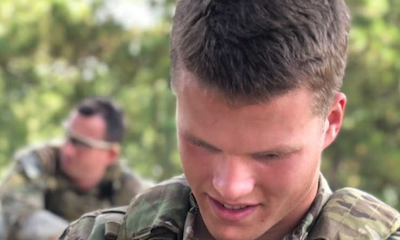 Luke was born and raised in St. Louis, Missouri, where after high school he joined the U.S. Army. Luke served in the 75th Ranger Regiment, deploying four times to Afghanistan and working within inter-agency teams. He was promoted to the rank of Sergeant and served as a team leader in a communications company. 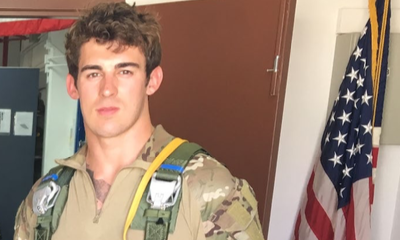 Raised in Iowa, Nikko spent a year on the Iowa State University football team before enlisting in the Navy in 2015. After completing Naval Explosive Ordinance Disposal Technician School, he served as an EOD Technician in both an operational and intelligence capacity.

Specialist Natnael "Nate" Getahun receives his acceptance to UChicago while serving in Kuwait.

Supporting any veteran who has served our nation proudly, and encouraging them to pursue the full extent of their dreams of higher education

A Holistic Approach to Supporting Veterans

A New Path to Admissions

The college search process and applying to the nation’s top colleges can be daunting for those currently serving or having recently left military service. UChicago has developed key partnerships and a streamlined pathway for Veterans to find a list of the best schools that are a fit for them as well as a better process of applying to the University of Chicago: 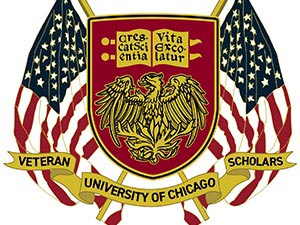 "UChicago emulates the commitment to excellence that I felt while serving in the Special Operations Community."—Matthew Stark, Army Veteran, UChicago Veteran Scholar, Class of 2023

The transition from military service to the campus environment can be a difficult one. UChicago has created a pre-orientation program offering academic preparation designed to maximize individual potential. The program also connects our Veteran Scholars to VA services, offers an introduction to career programming coupled with professional development opportunities, and builds relationships between students.

Living in community with the University campus is an important part of the UChicago experience. Often student veterans are forced to decide between adopting a commuter student lifestyle, or living in traditional residence halls that represent their experiences in the barracks a bit too closely. UChicago has developed a third option that affords student veterans and their families the opportunity to live together enjoying great apartments in community with the campus and other veterans while retaining independence.

What I really like about UChicago’s academic environment is that inquiry doesn’t stop at 'I’ve given you this problem, solve it my way.' It actually opens the field up to 'Here’s a number of ways you can tackle it, I want to see what your creativity and your intellectual rigor produces.
-
Alex Kilbourne
Army Veteran, UChicago Veteran Scholar, Class of 2023

Community and social programs remain just as important out of the military as they were in. UChicago affords opportunities designed to strengthen bonds and promote the success of our Veteran Scholars, while providing an environment for engagement by campus partners, other students, and families. 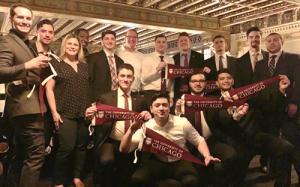 "The students and alumni are known throughout the world for their academic achievement and accomplishments in many different fields of study." —Colin Augustson, Marine Corps Veteran, UChicago Veteran Scholar, Class of 2024

The path to graduation can be overwhelming at times. Decisions regarding class selection, declaring majors/minors – and associating career and graduate school paths with those decisions are common. UChicago includes academic advising for our Veteran Scholars designed to draw from individual backgrounds and interests, while offering an intersection of services that provides a one-stop-shop to support their success.

Building on incredible systems of pre-professional programs, experiential education, and employer relations, we support our Veteran Scholars with internships, career preparation, and employment opportunities along with tailored advising in conjunction with our one-stop-shop approach with Academic Advising.

UChicago fosters a culture of inclusion and engagement, no matter your background. Since before I even arrived on campus I felt welcomed, supported, and empowered as a student.
-
Kaedy Puckett
Navy Veteran, UChicago Veteran Scholar, Class of 2023

Being a Veteran Scholar at UChicago means access to a dedicated one-stop-shop of services and programming that enables the student veteran throughout their College experience.

"The Veteran Scholars program brings together veterans from different backgrounds, branches, and job occupations and instantly provides us a network of people who believe veterans can succeed at elite institutions such as the University of Chicago."—Jason Guba, Marine Corps Veteran, UChicago Veteran Scholar, Class of 2023

Army ROTC is a registered student organization offered on campus at the University of Chicago. Students participate in physical training, classes, and leadership labs on campus.  The training a student receives in Army ROTC provides leadership development, military skills and career training. In addition to joining a growing community, there are opportunities for scholarships which include tuition and a stipend. Upon completion of the program, an Army ROTC graduate is commissioned as an officer in the Army.

"I love UChicago ROTC because when I can start my day surrounded by a group of people who care about me and build me both physically and mentally, my college experience is inevitably phenomenal."—Cadet Jonathan Merrill '23

UChicago is committed to supporting our Veteran Scholars. The College participates in the Yellow Ribbon Program. In addition to VA benefits, UChicago’s generous need-based financial aid program may supplement your benefits toward overall cost of attendance.

We are also happy to waive your application fee.

"The University of Chicago Veteran Scholars program is one of the top Ivy/ Ivy plus programs for veterans. From financial aid and on-campus resources to personalized academic and career advising for veterans, UChicago has proven that it not only wants high-performing veterans on campus, but that it is well-prepared to fully support them. I am beyond grateful to be a student and veteran at UChicago."—Kaedy Puckett, Navy Veteran, UChicago Veteran Scholar, Class of 2023