Well, That Was Awkward!
Nothing “Reg”-ular About This Library!
Just Check Google Naps
Where Art Thou?
How to Find the Perfect Dance Club

Well, That Was Awkward!

As far as UChicago traditions go, there are a ton of fun and infamous ones students love to talk about at every chance they get. You might have already heard of Scav and Broomball tournaments, or even Dollar Shake Wednesdays, all of which are highly anticipated events no matter what the season.

But what about House traditions? What about the fun things that students get up to inside their dorms? They may not be as grand or as widely talked about, but they are definitely just as memorable, if not more. I spent my first year in Booth House, one of the many fantastic communities located inside International House (the dorm building) at the edge of campus. Although my time there was shorter than expected, it was not without its fair share of thrilling and unforgettable events—one of which was called Awkward Date Night.

An infamous Booth bonding activity, Awkward Date Night involves an entire week of creative shenanigans carried out by the participants in a very stealthy manner. Members of the House are paired up (sometimes in a group of three) by the Social Chairs, and are given fun and creative tasks to carry out either the week before or at the dinner itself, depending on whether you were asking or being asked. In order to make things exciting, we had to keep our roles a secret until we presented our invitation to dinner, which meant a lot of sneaking around and suspicious questioning for several days.

I was sorted into a group with two second years, Jean and Will, and was to be asking them out to dinner by drawing a comic of myself asking them out to dinner (so meta, I know). However, much to my surprise, Will was also an asker, and he ended up asking first through a very interesting letter posted in our House Facebook group. It was crafted in imitation of a middle school love letter that’s a bit of an inside joke among the House, using very “cringy” language that had us all snickering as soon as we read the first line. It gave the entire House a good laugh, and I think it was truly one of the funniest date proposals of the week.

So in a similar fashion to Will’s confession letter, I decided to draw a very cringy comic somewhat parodying the manga “Monthly Girls’ Nozaki-kun,” which is filled with exaggerated romance and comedy tropes that were perfect for my prompt. I made the drawings as ridiculous as I could, definitely embarrassing myself a few times in the process, and finally finished the day before the dinner. That afternoon, I taped the comics to the wall of our House lounge, sent a photo to our Facebook group, then waited for my dates to respond. Soon enough, Jean came running over to the lounge, doubling over with laughter as soon as she saw the drawings, telling me “this is amazing” over and over before taking a picture of it herself. Later, both she and Will commented on the Facebook post, replying “what should I do?!!! heh. this is kinda awkward. but i accept owo ❤” and “Uwu. She got me! I guess the only thing I can do is... to say yes?” respectively, in continuation of the joke that Will had started. Looks like I successfully landed myself two dates! 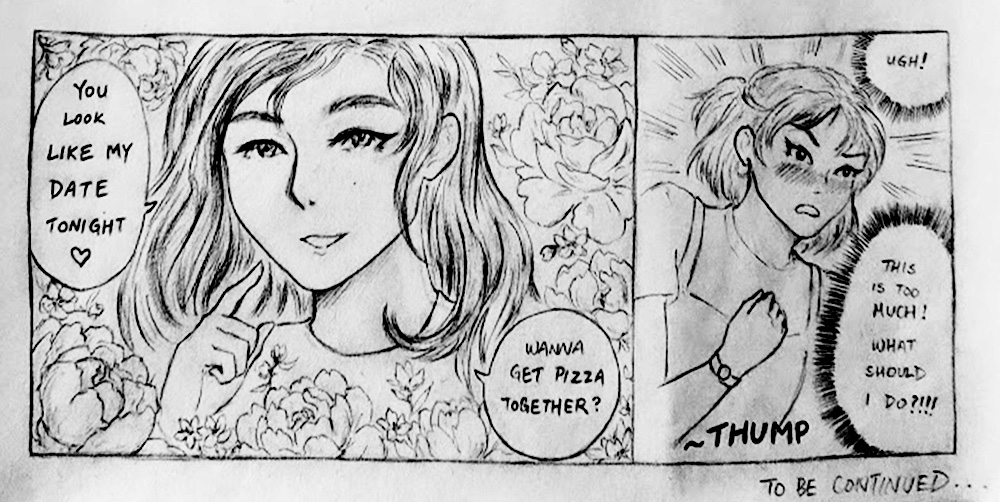 Meanwhile, some other memorable proposals I just have to include:

My friend Courtney was also sorted into a group of three, and her partner were to ask their date out to dinner by slipping anonymous notes beneath their door! Together, they wrote up a bunch of cheesy pick-up lines like “If you were a vegetable, you’d be a CUTE-cumber!” and even added these little drawings for enhanced cuteness. I believe they also included a hidden code to spell out their names across all the notes.

One night, while everyone was having dinner together at the House table, one Boothie stood up and made an announcement to everyone in the dining hall (which included other Houses besides our own): for his Awkward Date Night invitation, he had to present a freestyle rap asking his partner out to dinner! He then proceeded to blow us all away with the bars he dropped, and soon the entire room had erupted into cheers and applause for the amazing performance. Probably the most fire dinner date proposal ever if you had to ask me!

Now for the actual dinner! While I was unfortunately a little late due to an earlier club event, I still made it just in time to see what kind of antics the other half of our house would be getting up to. Making my way over to my dates, I sat down only to see… Jean eating pizza with a fork! What was going on? According to Will, she had been eating dinner with the wrong utensils all night, such as cutting up toast with a spoon, trying to pick up ravioli with the knife, just some very interesting manners you don’t see often at the table. Pretty awkward!

At the same time, there was also something strange going on with the group next to us. One member, Sammy, was attempting to start a serious philosophical debate every five minutes (he’s a philosophy major), while Chris periodically pulled out miscellaneous items from her pockets and set them on the table without any indication of removing them. Eventually, the collection consisted of pens, wristbands, a paper fan, a pair of sunglasses, some random toys, even a tiny bottle of hand sanitizer. They made some quality entertainment for sure, as I could not stop laughing at their antics the entire time.

Finally, perhaps my favorite part of the night: towards the end of the dinner, my friend Matthew stood up and tapped on a glass, announcing to the House that he would be making a toast! He toasted to the House, to the Social Chairs for organizing everything, and our RAs for just being awesome, then sat back down as everyone applauded in response. Pretty normal, not too awkward, right?

Now, Matthew had actually already planned his task with a few of us first-years beforehand, so I knew what kind of nonsense he was going to spout when he stood up and raised his glass again two minutes later. This time, he toasted to his date Mitch, calling him silly things like “the most beautiful creature he had ever laid eyes on” and “the most talented musician to exist” before gifting him the bouquet of flowers he had prepared beforehand. This actually happened one or two more times, each more ridiculous than the last, up until we had to leave the restaurant. I can still remember how some of the other customers shot us strange looks from across the room, and even a few of our own Boothies let out a groan by the fourth toast. This was truly a task that could only be done by someone as shameless as Matthew, so he definitely has my respect for pulling that off.

Just like that, Awkward Date Night ended in all its hilarity and awkwardness. Although I was not able to experience another one the following year, this Booth House event has stuck with me as a fond memory, and I can confidently say that it’s one of my favorite traditions to date at UChicago.