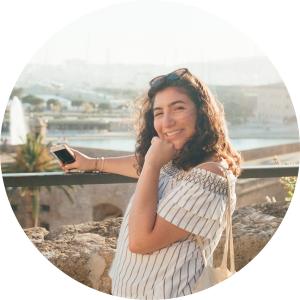 Christina is a fourth-year student in the College studying English Literature. When she's not in class or working on her B.A. thesis on fanfiction, she spends her free time attempting to cook, visiting art centers around Chicago, and trying to learn her fifth language (key word: trying).

Uncommon Class(es): Taking Class Out of the Classroom

Uncommon Class(es): Taking Class Out of the Classroom

When I think of some of my favorite UChicago classes over the last four years, the two that stick out the most have little to do with my actual major and didn’t even take place in a real “classroom.” I’m an English major, but just like everyone here at UChicago, I took a class to fulfill the arts requirement of the Core. I did this in the fall of my second year by taking “The Art of the Book in the Middle Ages.” I didn’t know a single thing about medieval art, but I saw “Book” in the title, and my inner English major made me register for it.

We didn’t meet in Cobb or in the art history building; our class met twice a week inside the Special Collections Research Center in the Regenstein Library! Each class period, we would walk into the room in the back to see a whole spread of books and manuscripts on the tables; one week we studied books of hours, and the next, we looked at old rabbinic texts. I got to touch these hundred-year-old books with my own hands and, as silly as it sounds, it made me feel like I was truly a real scholar doing real academic work! Our professor even let our class be the very first people to analyze some new 14th century texts the library had just received.

The class was totally out of my comfort zone, but it made me completely enamored with medieval art history. We talked about the various religions associated with the books we handled, but we also spent time learning about the books as physical objects; we took magnifying glasses to the binding, we analyzed the coloring used in the illuminations, and we even tried to trace specific artists’ work through a handful of manuscripts. As an English major used to thinking about books in the abstract, this class gave me a whole new physical perspective on the things that I love so much.

Since I enjoyed this class so much and became a little obsessed with medieval art, I decided to take another art history class that spring. Once a week for three hours—with a break in the middle, don’t worry!—nine other students and I would go to “Saints and Heroes, Art of Medieval and Renaissance Europe.” Just like my first art history class, this one didn’t take place in a normal classroom; it didn’t even take place on campus! We traveled downtown every week to meet at the Art Institute of Chicago! Each meeting covered a different topic; we’d focus on a collection of reliquaries, then religious textiles, then arms and armor, then the Art Institute’s own Ayala Altarpiece. We went beyond just art history and thought about art conservation and museum practices: How can we best display this work? How can we make this exhibit as accessible as it can be? We met with conservationists and the very people who had designed the exhibit we were studying week to week, and it felt like so much more than a typical college class.

For our final project, we had to “adopt” a piece from the gallery and do original research on it. I decided to wing it a little bit and picked a 13th century Corpus of Christ. When I started researching, I wasn’t exactly thrilled to realize that only two people had ever written about it. One of the articles was in German, the other in French. With neither language being one that I understood, I went into the German and French language departments to beg for help (turns out there wasn’t much begging involved, as the kind professors whose doors I randomly knocked on both loved medieval art).

Even with these articles translated into a language that I could understand, the weight of the project started to settle on my shoulders. I—a college student with very little art history knowledge—was going to be the third person in the world to ever write about this work of art. I was a little obsessed with the corpus; it was my phone’s lock screen for a while, and all my friends heard about for weeks was: “The way the feet are crossed is wild, no one else was doing it like that in the 14th century.” I went to the Art Institute Library and consulted every librarian I could to learn more about this work.

I was sitting there in the Art Institute Library next to actual scholars doing actual work when I realized I, too, am an actual academic. It took a while for that sentiment to actually set in, but looking back, that class was my first big push into real research; I wasn’t just Googling, I was sifting through databases and auction records and trying to read past art collectors’ really, really horrible handwriting to trace this work back to its origins. Both art history classes, though completely outside of my field of study, reinforced the very UChicago belief that learning doesn’t end when you leave the classroom, it happens everywhere and anywhere.