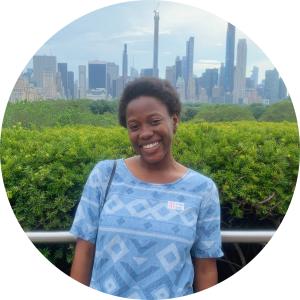 Ife is a third year in the College from Powder Springs, Georgia, double majoring in Sociology and Global Studies and minoring in Spanish. You may spot her giving campus tours, mentoring middle school girls, or napping in the most absurd locations possible. In her free time, she enjoys taking Zumba classes, wandering around the city of Chicago, and drinking way too many vanilla lattes.

If you’ve been paying close attention to Netflix over the past couple of months, you might’ve beheld the unlikely duo that is Will Ferrell and Rachel McAdams starring in Eurovision Song Contest: The Story of Fire Saga. If you thought that the concept they present in the movie was created by a set of very talented Netflix writers, let me tell you this: that is no made-up phenomenon. The Eurovision Song Contest is an international spectacle that has taken the European continent by storm each year since it began in 1956. Eurovision gathers musicians and fans from all over Europe in one of the continent’s grandest cities each year, pitting nations against each other in a musical competition for the winning title.

How do I know so much about Eurovision? It’s all thanks to the UChicago signature course “Eurovision Song Contest,” taught by renowned professor and Eurovision expert, Philip Bohlman.

When I signed up to take “Eurovision Song Contest” with Professor Bohlman in the spring of my first year, the actual competition had only been something of a legend to me. I somehow knew that Céline Dion had competed in one cycle, and during my Mamma Mia! phase, I discovered that ABBA represented Sweden in 1974 and swept the competition with their hit “Waterloo.” However, I had no idea about the international impact that the Eurovision Song Contest has had over the course of its 65 years.

Eurovision exists at the intersection of politics and history and aesthetics and popular culture. In class, we learned not only about the performative aspects of the Eurovision competition but also about the cultural and political underpinnings of Europe that influenced the course of the competition. Artists use their Eurovision performances to express nationalism and pride, challenge gender and sexuality norms, and even make political commentary. We spent the quarter discussing competitors from Eurovision, like Olivia Newton-John and Enya, and what their careers have looked like post-competition. We learned about landmark competitions, such as the 1969 competition where four countries tied for the winning title because there were no rules for tie breaking. Overall, we dove deeply into how ingrained the Eurovision Song Contest is in the fabric of European life.

When the Grand Final was broadcast live from Tel Aviv in May 2019, Professor Bohlman hosted a massive screening party for our class in the Logan Center for the Arts, complete with an absurd amount of food and a buzzing excitement as we all waited to see whether our predictions for who would win would come true. We had placed our bets on the winning performer being either Italy’s contestant Mahmood with his song “Soldi” (my personal favorite) or the Netherlands’ contestant Duncan Laurence with his song “Arcade.” I don’t want to spoil who won, but let’s just say the final moments were intense as votes from each country’s jury and television voters were counted.

A class about Eurovision would not have been complete without attempting to put on our own competition. In the final few weeks of the course, we prepared for our own rendition (of course, on a much smaller scale). We landed on calling our competition “Chicagovision,” and focused on using our performances to highlight the different aspects of Chicago that make us feel at home. Each of our five groups filmed a unique “pre-song postcard” (which is used to introduce each country and their artist prior to their performance) and answered questions from the “media” in a mock press conference before we launched into our performances. I sang a song with one of my group members that she had written about feeling at home in the arts scene of Chicago. One group sang a pirate’s sea shanty about Lake Michigan, another paid homage to the many-colored train lines and buses of the CTA, and other groups referenced Chicago’s music scene and the vastness of the Midway. At the end of our performance extravaganza, we held a vote to determine our Chicagovision champion.

By the end of the course, I was a walking Eurovision encyclopedia, roping my friends into watching past performances with me and reciting fun facts about European history. Without this class, I may not have gotten to see how my interests in music and political history can overlap while also learning about one of the world’s greatest cultural phenomena. Even now, having taken “Eurovision Song Contest,” I have an even greater appreciation for what Will Ferrell and Rachel McAdams were tasked with bringing to life, and I look forward to what next year’s Eurovision has to offer.