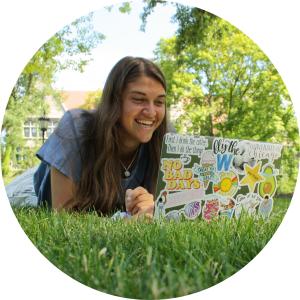 Nicole K. is a second-year student from the suburbs of Chicago double majoring in Business Economics and Psychology. She works on the Outreach team in the Office of College Admissions and loves to watch movies, bake chocolatey desserts, and dance her heart out to any and every Beyoncé song.

UChicago By The Letters
A Truly Global Sport
Laptop Stickers and What They Say About the UChicago Student
My First Year, As Told Through Music

UChicago By The Letters

With eight different a cappella groups to choose from, UChicago students have no shortage of options when audition season rolls around. And if singing is not your thing, you can attend one of the many a cappella concerts on campus and cheer on your friends! One group holds an annual concert in UChicago’s beautiful Bond Chapel, complete with a pie auction at the end!

Bartlett is one of three dining halls on campus, and it is located closest to the quad, across from the Regenstein Library (the main library on campus). Student favorites at Bartlett include the taco station, the ice cream sandwiches, and the grill station!

Cobb Lecture Hall was the first building to hold classes at UChicago! It is an extremely popular lecture hall (the largest one on campus!) in which a wide variety of classes are held throughout the day, the entire academic year. It’s also home to the Film Studies Center and an art museum (the Renaissance Society) on the top floor. While it is considered a lecture hall, most classrooms are discussion-based, holding 25 students or fewer.

The “Div School” is the graduate school for the study of religion at UChicago. It houses the famous Grounds of Being cafe, which has an awesome tag line: Where God Drinks Coffee. Students love the uniquely colorful cups and the wide variety of food and drinks offered.

Eckhart Hall is home to the Department of Mathematics and is in the main quad on campus. It has its own library that contains 13,000 volumes of research-level monographs, along with selected textbooks in mathematics and reserves collections for mathematics, computer science, and statistics.

Fundamentals is a major that allows students to concentrate on a fundamental question  of their choosing. Students read classic texts and enter a thoughtful pursuit of basic questions.

Gargoyles can be seen all around campus in different forms. In fact, they have become a symbol of UChicago due to their prominence!

Harper Memorial Library was established in June of 1912 and was named after William Rainey Harper, UChicago’s first president. Students come here for class, coffee, or to get some work done in the beautiful reading room. But here’s a little known fact: Harper Library doesn’t actually contain a single book!

Ida Noyes Hall is home to the Office of Career Advancement. Students will come here to meet with their assigned Career Advisers and receive help with writing resumes, crafting cover letters, and learning about life after college. This is also where Doc Films, the longest running student-film society in the nation, screens films every week!

The largest library on campus is more commonly referred to as “the Reg”. It houses the student-run coffee stop Ex Libris along with UChicago Special Collections. It’s also attached to Mansueto Library, which rose to stardom recently when it was used as a filming location for the Divergent movie.

Kent is composed of halls for chemistry lectures and smaller classrooms for discussion sessions.

L - Logan Center for the Arts

The Logan Center is home for all creative life on campus. It houses concerts, exhibitions, performances, programs, and more. It also has a café that offers a unique dining experience, making it a campus favorite.

There are an extraordinary number of people affiliated with UChicago that have also been Nobel laureates. There are over 90 winners in categories such as Chemistry, Economics, Literature, Peace, Physics, and Medicine.

The $1 milkshake is one of the most popular UChicago traditions. Every Wednesday, the milkshake bar in Reynolds Club opens, and people from all parts of campus come to grab a vanilla or chocolate milkshake with cherries, sprinkles, Oreos, and whipped cream…all for only one dollar!

Phil the Phoenix is our school mascot, and he can usually be found working the crowd at football games, basketball games, and other special events! The phoenix was originally chosen as a mascot for UChicago because it is a mythical creature that rises from the ashes. This is meant to reference the Great Chicago Fire of 1871 after which the the city was rebuilt from its ashes to create something better and bigger.

The Quantrell Award is an award given annually by the University to faculty members in recognition of their excellence in teaching undergraduate students. It is based on letters of recommendation from students and is among the most treasured accolades by faculty. The Quantrell Award is known to be the nation’s oldest prize for undergraduate teaching.

The Reynolds Club is the hub for student life on campus. It is home to Hutchinson Commons, where there are a wide variety of food options, a large seating area, and our signature one dollar milkshakes! Reynolds also has Pret a Manger, a popular eatery on campus, and Hallowed Grounds, a popular student-run coffee shop. The Reynolds is where lots of RSOs (fancy term for clubs) meet and where our University radio station broadcasts from! Lastly, it has our University seal etched into the ground…don’t step on it or else…

Summer Breeze is a concert put on by the Major Activities Board every spring at a discounted price for students. Big-time artists such as Becky G, Aminé, U2, Chance the Rapper, the Red Hot Chili Peppers, Eminem, and many others have performed at Summer Breeze.

The Trott Business Program provides UChicago undergrads looking to pursue a career in business the opportunity to take classes at the University of Chicago Booth Business school, as well as gives students specialized college advisors and internship opportunities.

University Theater is a student-driven performance theater RSO at UChicago that produces 35 shows per year. The productions are proposed, directed, designed, and performed by students, regardless of their academic majors.

Vienna in Western Civilization is one of over 55 Study Abroad programs offered by UChicago in over 30 cities around the world. In this program, Civilization Studies, part of the Core curriculum, will be taught in a 10-week span in the lively capital of Austria.

This is one of our most popular supplemental essay questions for students applying to UChicago. Along with the Common or Coalition Application, we ask that every student completes a UChicago Supplement, which includes an extended essay, by choosing their favorite prompt from our extensive list. UChicago has long been renowned for our provocative essay questions that act as opportunities for students to think deeply while showing us who they are.

Along with "...Where is Waldo, really?" "Find x" is one of the most famous extended essay prompts!

We see them on campus twice each year during the campus-wide game of Humans vs. Zombies. This is a live-action alternative reality game in which players begin as “Humans” and try to survive in a world where “Zombies” have begun to rise from the dead. Players defend themselves with nerf guns while trying to outlast the Zombies. The game ends when every Human has been turned into a Zombie or the Humans survive a set amount of time. Anyone is welcome to participate in this game, and it acts as a great way to have some fun on campus.