Critical Videogame Studies or Grimm's Fairy Tales? A How-to on Choosing Classes at UChicago.
Life of the...Brain?
Three Weeks by the Sea
Dorm to Downtown; Stories of House Trips

Three Weeks by the Sea

Just a month ago, my dad drove me from our home near Boston, MA to a small, picturesque, seaside town on Cape Cod called Woods Hole. This town isn’t like any other coastal spot; it’s a world-renowned hub of marine biological study. Scientists come from all over the country and the world to study and work here. So, for a young scientist like me, traveling to Woods Hole was a dream come true.

What was I doing there? Here’s some context: UChicago has had an affiliation with the Marine Biological Laboratory at Woods Hole since 2013. Now, for the first time, they’ve developed classes specifically for undergraduates. One focuses on the study of  invertebrates and their local biodiversity through a large research project. Another explores microbiomes around Woods Hole and teaches methods for researching them. The class I chose is called “Observing Proteins in Action; How to Design and Build your own Instruments”. It mostly focused on channel proteins in neurons because we can study them in many different ways.

Because these classes are completely new, I had no idea what to expect. I showed up to class the first day and was surprised to find out we had four professors, two TA’s, and eight students in the class. While I’ve had small classes before, this ratio was very surprising. To get an idea of the structure of the class, one student asked, “Will this class be 9-5?” to which Professor Eduardo Perozo responded “Oh no, absolutely not. You’re in Woods Hole. You should take advantage of your time here, so use the lab whenever you want!”

We dove in day one with an in-depth lecture about the electric model of the membrane. Pancho Bezanilla gave the lecture, the first person to measure the tiny gating currents in sodium channels. Pancho - first names were preferred by all of our professors - had an excitement for this topic that was inexplicably contagious. Even I, a subpar physics student, found myself excited about the electrical components of what we were studying. And, as it happened, Pancho had taken these measurements at the Marine Biological Laboratory. 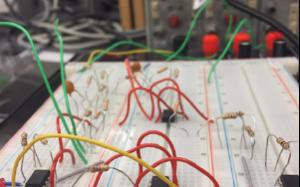 In the afternoon, we all headed to lab for an application of what we’d learned in class. Our professors made it very clear to us that our labs would include cutting-edge techniques -- things scientists are working on as we speak. The skills we acquired from this course could be immediately applicable to modern-day research. The first week, labs focused on circuits so that we could learn to model a cell membrane through its electric properties. See the photo of my final circuit!

After we understood circuitry, we moved onto purifying channel proteins and inserting them into bilayers that we formed ourselves. This was a tough task, but, once it worked, we could actually see the currents change as a result of the channels joining the membrane. Our final collective lab project was to build a microscope and use it to see fluorescence in cells that we’d injected RNA into. 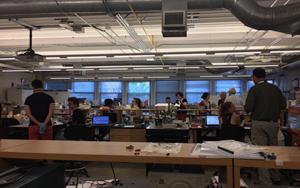 During our last two days of class, we were tasked with formulating and completing a project that would draw on something we had learned over our three weeks. My lab partner, Adam, and I had found our final lecture about protein structure and electron microscopy really interesting, so we decided our final project would consist of purifying ribosomes from E. coli we had in the lab, running them under the electron microscope, and making a 3D model using the EM images. 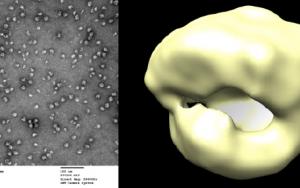 I’m so glad I participated in this class and got the chance to immerse myself in a once-in-a-lifetime learning environment. Every breakfast, lunch, and dinner were filled with lively conversations with our professors about world events, research discoveries, and advice for furthering our scientific careers. They even spent their free time showing us Woods Hole’s hidden beaches, bringing us on a whale watching trip, and exploring the abundant marine life in a nearby marsh. Spending up to 12 hours a day with the same group of people allows for a level of connection and around-the-clock education that wouldn’t be possible otherwise.