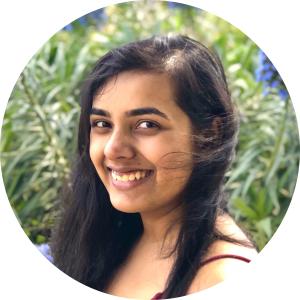 Suhasni is a fourth-year student from Delhi, India, majoring in Economics. Outside of the Admissions office, she can usually be found making bad puns, taking naps, or eating her way through the city.

I don’t enjoy writing. I knew taking a screenwriting class could be a bit of a challenge, but being able to write a full web series in a quarter seemed like an incredible opportunity. With an otherwise light course load, I wanted to do something that challenged me.

This quarter, I finally realized why I haven’t liked writing for so long. Nearly all my writing assignments growing up had a prompt or theme that restricted what I could write about. I’d never really tried to tell a story that was my own.

We started MAAD 24910, Short Form Digital Storytelling: Creating a Web Series, by talking about our favorite sitcoms and web series — not as works to be analyzed, just casual discussions like you would have about your latest Netflix binge. Our discussion really set the tone for the rest of the quarter: This class was a platform to explore what we wanted to explore and tell a story that we wanted to tell.

After the initial weeks of brainstorming and workshopping our pitches, we finally started writing our scripts. It was challenging to develop plot, characterization, and humor in short 5-minute episodes. And while it was nerve-wracking to think the whole class would be reading what I put down on the page, it turned out to be so much fun to see my script come to life at a table read.

We had the chance to write whatever we wanted. We received constructive, practicable feedback from the professor and classmates, and the professor literally had a recommended show or film for every single one of our series. We had the time to rewrite our scripts and tangibly improve on them based on these critiques. Each week, we also read and reflected on a sitcom script, which helped us learn ways to approach the challenges that a short screen time presented.

In my show, I wanted to somehow encapsulate my experience as an international student without making it the main focus of the series. I also wanted to mix genres that don’t usually go together. Therefore, I decided to write a spy-thriller-comedy about two students from India navigating college in small town American as they form new relationships and try to hide their secret identities. I really enjoyed combining spy sequences with quirky comedy, and I loved hearing the class’s reactions to my jokes and plot twists.

Ultimately, the best part of this class was hearing the creative, honest, and incredibly funny stories that everyone had to tell. From a show about stolen identity to a medieval fantasy anime to a show about working in a college admissions office (yes, about a third of this class worked in UChicago’s admissions office!), we heard each other’s fascinating scripts every week.

I love classes at UChicago that make you critically engage with ideas and focus on a deep level of analysis. Creating a Web Series was different. It was personal. It was about engaging with ideas in a way that you wanted to. It was a completely different experience, but one that was just as important.