Adulting In College: My Experience With Studying Abroad 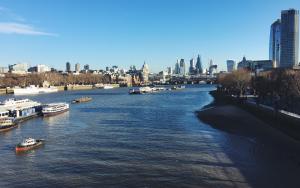 A photograph that I took of The City from Waterloo Bridge.

Growing up in the Bay Area, I’ve always been drawn to urban cities and visited San Francisco regularly; I remember taking weekend trips to the California Academy of Sciences in high school and spending hours reading in City Lights Booksellers & Publishers before having dinner in Old Chinatown with my parents. As a teenager, I dreamed of living in a penthouse apartment and taking part in the hustle-and-bustle of a big city.

When I was choosing colleges, I considered location to be an important factor for my undergraduate experience; I viewed it as an opportunity for me to uproot and experience life in a different culture and place. I rationalized that since I was born in the West Coast, I would consider the Midwest and the East Coast to be the next “hit spots.”

Moving to Chicago and settling down in Hyde Park was such an enlightening experience; in my first year, I met people from various backgrounds and places in both my classes and College House, and I would sit at the house table listening to my friends’ stories about New York, Washington DC, and Vancouver. As a native Californian, I had my fair share of Silicon Valley anecdotes and San Francisco adventures, but I had this tugging, almost restless feeling in my mind that I wanted to travel and explore around the world.

In my second year, I reached out to the Study Abroad Office and discovered a wide variety of opportunities ranging from quarter-long UChicago Faculty-Led programs to year-long Direct Enrollment programs. After several appointments with my Academic and Study Abroad Advisor, I applied to the British/Irish Direct Enrollment program at King’s College London with an intent to take courses in the Film Studies and Business Management departments.

I was absolutely ecstatic when I found out that I was accepted into the program! Since high school, I developed an interest in world cinema and English literature and King’s College London offered a breadth of courses that aligned with my academic interests. I was also passionate about becoming another college’s student for a year - meaning that I would immerse myself fully as a King’s College London student. This opportunity meant that I would leave my friends and Chicago for a year, but I’m so glad I chose to pursue this year abroad to get out of my comfort zone, make new friends and colleagues, and spark my desire to explore different countries and interact with new cultures.

When I arrived to King’s College, I was sorted into a first-year accommodation called Stamford Street Apartments, which was right across the street from the Waterloo campus (where I took my Business Management classes) and a quick walk to the Strand campus (where I took my Humanities classes). King’s College has several university-owned campuses across Zone 1, and I was lucky to score accommodation in the heart of the city! For the first month of school, I would walk across Waterloo Bridge in the mornings and pass by tourists constantly photographing the skyline - it was an unnerving realization that I was settling into this new city and culture, that I was comfortable living in London. 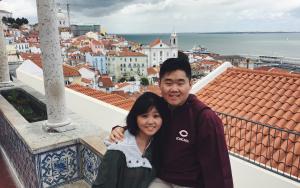 My sister and I exploring Lisbon, Portugal.

Being in a new city meant meeting new people and while there were a lot of exchange students studying abroad for the first semester, I was one of two UChicago students to enroll at King’s College. About half of UChicago students decide to study abroad for a quarter, and many of my friends chose programs in Hong Kong, Barcelona, and Paris, so this was an opportunity for me to start from scratch. Luckily, it didn’t take long because one of my closest friends, Max, lived right across the hall from me! I also met coursemates in Business Management and Film Studies and went to practice with the weightlifting team.

Since lectures ended in March and our exams were in May, I took two weeks to travel across central Europe with my family. Seeing my family after spending two semesters abroad cemented the notion that while I was constantly challenging myself in unfamiliar situations and leaving the nest, I’m on my way to becoming an adult and having people who care deeply about my well-being keeps me grounded. In other words, I realized that I still had a lot of growing up to do and studying abroad was a way to expand my worldview and “expect the unexpected.”

Flash forward to today, I’ll openly confess that I’m wanderlust. The “travel bug” hit when I was in Lisbon, Portugal, and I’m eager for an opportunity to relocate to Europe in the future! After graduation, I’ll be spending time in London and traveling around Asia for a month before returning home in September. I enjoy traveling with friends and meeting new people along the way, so if you have any recommendations or travel guides, feel free to send them my way!