Immersing myself into the 1492 Papal Election Experience

Immersing myself into the 1492 Papal Election Experience

Ada Palmer’s class is like no other at UChicago; instead of PSETs and essays, you are partaking in three weeks of background deals, spies, negotiations, 15th century language quirks and secret marriages in order to manipulate your character into the best position possible during a 1492 Papal Election simulation. I took part as King Henry VII of England, and it was an incredible experience that gave me a new appreciation for the political complexity of the Italian Renaissance period. 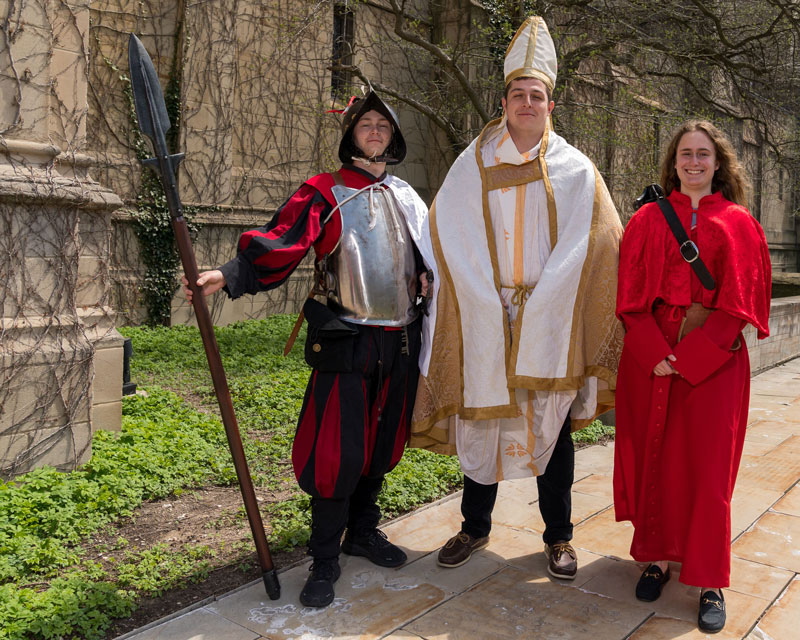 Students of Professor Palmer's class in their era appropriate garb, ready to discuss the fate of the papacy.

After reading my extensive character sheet, I settled on prioritizing my main goals of reclaiming France and convincing the other monarchs to agree that I was the rightful heir of France. In addition, it was helpful to have allies in the form of Portuguese Cardinal da Costa and English Ambassador Hadrian. Together, we strategized how to best get our first choice, Italian Cardinal Sfroza, to be elected Pope. During negotiations, however, it became apparent to me that England was not as directly affected by internal threats in Europe and was a bit more removed. I had less leverage, but nevertheless plotted with the Holy Roman Empire and Spain to get Sforza elected.

Unfortunately, after much backdoor dealing, we were unsuccessful and felt completely blindsided when we heard that Spanish Cardinal Borgia had been elected in a landslide due to a secret Franco-Spanish contract. My Cardinals were frantically messaging me asking me what to do, because until then I had held off on my support for Borgia because he was a Spaniard and Portugal had been incredibly anti-Spain.  I decided to drop the continuous push for my claim to the French throne – although frustrating, as it was a key part of the character sheet, seeing France and Spain create that secret contract made me realize there was more flexibility with what I could do while staying true to my character.

One of my favorite points of the simulation, therefore, was the war preparation phase after the Papal election, because it seemed that I finally had proper room to negotiate. Having money and Atlantic ships meant I was wanted by both France and Spain, and so in the end I chose to send ships to the Spanish because I needed strategic access to the straits of Gibraltar. I still managed to extract valuable Italian courtiers from France though, by agreeing to send the rest of my troops on a crusade (thus removing them from threatening any European wars). I also created marriage alliances with Spain and the d’Este family, and so through all these moves I felt as though I was having more of an impact on the simulation and securing a better future for England than I originally thought I could.

During our debrief after the simulation, it was fascinating to realise how many other storylines were happening that certainly impacted my experience, and yet I was completely unaware of them. I would try and secure my position, by attempting to get a marriage alliance with Spain for King Henry’s son Prince Arthur, only to find out that Spanish Princess Catherine of Aragon was being married to King James of Scotland (a strong ally of France). Until that point I had not been concerned about Scotland invading, but the part of the Franc-Spanish secret agreement that stated a navy was being sent to Scotland meant I had to do something to prevent an invasion; otherwise I would no longer have leverage over Spain and France regarding who got the support of my armies, because they would be needed in England to fight against Scotland. Overall, I am just a lot more impressed with the monarchs, Cardinals and Italian families that successfully manoeuvred during this period, because I felt continually overwhelmed by all the different moving parts.

The students of Professor Palmer's 1492 Papal Elections class after a hard day's work of plotting, conniving, and vote gathering.

I was so grateful for the extensive effort Professor Palmer and her TAs put in to give us such an immersive experience, and for the opportunity to engage with my peers in a completely different manner. As a History major, I loved the opportunity to create my own trajectory in a set historical environment, because it allowed me to understand the period in a completely different way than I would have by just reading about it.