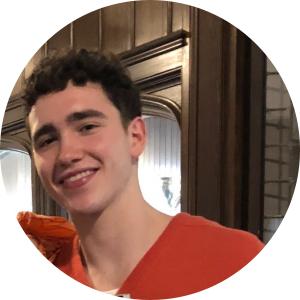 Ian is a second year in the College, majoring in English and Creative Writing. Outside of the classroom, Ian can usually be found wandering across campus, thanks to his poor navigation skills. This wandering takes him to the Ida Noyes Theatre, where he is a volunteer projectionist for Doc Films, or the back corner table in Hallowed Grounds Cafe. He writes for MODA Magazine, a fashion publication, and BITE Magazine, a food publication.

Doc Films is the longest continually running student film society in the nation and has been around for more than 75 years. It screens a different film every day in UChicago’s Ida Noyes Theatre, patronized by cinema-obsessed students and Hyde Park residents, as well as casual moviegoers looking for something beyond the digitally compressed streaming service fare. Each day of the week presents a different series curated by volunteer programmers, including director retrospectives, genre explorations, and thematic series. Doc Films has been an important part of my college experience, so I wanted to take some time to spotlight this historic UChicago institution and talk about my involvement with it.

Doc Films is a film resource like no other, where you can watch digital, 35mm, and 16mm screenings of some of history's finest cinema. And the theatre and film society is completely volunteer operated. Students can serve on the volunteer-lead Doc Films board, sell tickets, put up posters, or become a fireguard, show captain, or projectionist.

I’d never encountered such deep and varied opportunities to engage with film, and I arrived at UChicago during Autumn Quarter of my first year knowing I wanted to participate in Doc Films. I began as a fireguard on the Monday I Showing, a series called “Grand Dames of the Arab Screen,” sponsored by the Center for Middle Eastern Studies. I assisted the projectionists in aligning and focusing the picture and watched each film to ensure there were no problems with the screening. This gave me the opportunity to get a peek at the inner workings of the film society and experience a series from start to finish. That same quarter, I also programmed a series about the heist genre to be shown in the spring, which was a wonderful way to research and study the history of a specific aspect of film, interact with other programmers, and curate moviegoing opportunities for students.

During the following Winter Quarter, I decided to work as an apprentice projectionist, learning the inner workings of the projection booth, its workflow and components, and the demands of working with analogue projection equipment. This position was particularly gratifying, allowing me to touch and preserve film in its original form.

My experience at Doc Films has been varied and exciting. I have attended numerous Doc Films screenings per week, as the film calendar is fantastic in its breadth and complexity, highlighting both the obscure and the entertaining corners of cinema. Doc Films has also provided me an opportunity to connect with the study of film on a deep and enriching level and become part of a community of students with a similar interest in film. It has been the backbone of my UChicago experience thus far, and I cannot wait to continue to participate.