Baking for Nine Hours on a Saturday

Baking for Nine Hours on a Saturday

The housing system at UChicago is unlike that at any other school I have seen. We often compare our housing system to the one in Harry Potter: bustling communities built into the school, waiting to welcome you with open arms. If you’re unfamiliar, a house is a section of a dorm (for example, maybe the first two floors on the right side of the building) that consists of up to 105 students. Your house really becomes your family away from home. Every house has a lounge that is the epicenter for movie nights, video game tournaments, snacking, and studying. There is also a huge house table in your dining hall which is a great place to find good conversation and allay fears of eating alone.

Students spend a lot of time interacting with students from their own house, but houses also interact with each other. A big driving force behind inter-house fun are the Resident Deans (RDs). If you’ve never heard of RDs before, don’t worry! They are another unique facet of UChicago’s housing system. RDs are associates of the university (such as professors) who live in the dorms and who are in charge of a whole cluster of houses. Each of the dorms on campus has at least one pair, and they provide a lot of opportunities to engage with different events on campus as well as throughout the city of Chicago. The RDs for my dorm (Renee Granville-Grossman East) are Larry and Cathe McEnereny. They are a wonderfully delightful couple who host study breaks, facilitate trips around Chicago (Bulls games, operas, etc.), and host teatime in their apartment. All of these activities are a great way to meet people from other houses and to have some fun for a few hours. One activity I never expected, and one that stands out, was The Great Renee Bake Off, a dorm-wide baking competition à la The Great British Bake Off.

I signed up, of course, because I love the heat of competition and I wanted to represent my house, Cathey House. The Bake Off took place over the course of a whole Saturday. In traditional Great British Bake Off fashion, there were three mini-competitions: the Signature, the Technical, and the Showstopper. For the Signature, we could bake any form of mini pie. It was meant to be a test our creativity and baking aptitude. We would then be given a surprise recipe for the Technical, which would reveal our improvisational skills. Finally, the Showstopper would be a themed cake based on “something UChicago pays for.” This was the ultimate test of innovation and spectacle. The prize for the winning team of each mini-competition was a $100 gift card for Jewel Osco (one per round per team). There would also be an overall winner, who would receive a grand prize of an RD-catered study break. Since no college student can refuse free homemade food, the stakes could not have been higher.

A great thing about the competition was that we were allowed an ingredients budget and were reimbursed after the competition. This allowed the teams to go all out! At the start of the competition, a long buffet-style table was laid out with placards for each of the 8 houses that reside in Renee Granville-Grossman. As I walked in with the rest of Team Cathey, the air was alive with nervous energy. Not only were the actual bakers there, but their housemates had come to cheer them on! The judges looked on, ready to inspect each and every dish. They were composed of Resident Dean Cathe McEnerney, a UChicago professor who has won local baking competitions throughout Hyde Park, and a director from Bon Appetit (the company in charge of managing the dining halls on campus).

For the Signature Round, my team made apple and honey goat cheese empanadas to fulfill the mini-pie requirement. When the round was over, the judges took a painfully long time tasting and discussing each dish. The wait was stressful, but we ended up winning the prize with our complex flavors and dulce de leche dipping sauce. Some of our notable competitors included lemon-blueberry tartlets and apple hand pies. Among UChicago’s academic brilliance, baking seems to be another strong suit, because everyone’s creations were delicious!

Next up was the Technical Round. Prepackaged bags of ingredients were distributed to each team. The only direction given was a list of measurements. We were on our own. Our task: bake a Swiss roll. My knowledge of Swiss rolls: none. As we scurried back to our respective kitchens, people around me were making harried phone calls to parents and friends, and even searching the internet for advice on how to tackle the Swiss roll. The only variation I had ever heard of was of the Little Debbie sort from the supermarket. Our team ultimately lost, and we don’t talk about the Technical Round anymore. However, just because we fumbled didn’t mean other teams did. The round ended with some very interesting lime flavored swiss rolls, decorated with lime zest or candied limes, and Kenwood House emerged victorious. 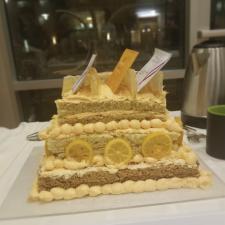 At long last, we arrived at the Showstopper Round. We needed all the time we could get, so this round was three hours long. To remind you, the theme was “something UChicago pays for.” Our inspiration for the cake was “Teatime in Renee Granville Grossman,” in honor of a beloved event in the dorm that is hosted by the RDs. We planned for our cake to be three tiers, each one a different flavor of tea. We brewed earl grey milk, chamomile milk, and jasmine milk to infuse the batter with a light tea flavor. We finely chopped tea leaves and made sugary syrups to baste the cakes and create a punchy, aromatic flavor. The frosting was a honey buttercream as a nod to sweetening tea with honey. Finally, we lined the cake with candied lemons. It was our most ambitious task yet.

When we walked into the judging room, we were one of only three teams remaining: Cathey, Kenwood, and Crown. All the others had forfeited. Crown had made a vanilla cake with Oreos, upon which they had squiggled frosting facial features. The Oreos were meant to represent the Resident Assistants (RAs) of the entire dorm (if you’re unaware, RAs are upperclassmen in the College who help host events for houses and provide guidance to their younger housemates). Kenwood had made an impeccably decorated cake with fondant made to look like the cover of Doing Honest Work in College, a well-known book that every incoming student receives from UChicago at the beginning of their first year.

The RA cake was the winner of the third round! The clear attention to detail and heartfelt homage to the RAs had tugged at the judge’s heartstrings just enough to even out the competition. With Crown finally securing a win, each of the final teams was on equal footing for victory, with Cathey winning the Signature, Kenwood winning the Technical, and Crown winning the Showstopper. At this point, it was time for the judges to select an overall winner. And that overall winner would be…

Not us. We lost. We really did. KenwoodHouse had secured an overall victory due to their consistency throughout the competition. I was sad, heartbroken, sore, and severely dehydrated. In the Cathey House lounge, my team surmised outrageous conspiracy theories to explain away the pain of our loss. As our grumblings went on, we watched our housemates happily enjoy the remains of our defeated cake. Their enjoyment ultimately lifted our spirits. It was enough to fuel my excitement for next year’s competition, which I can’t wait to participate in!