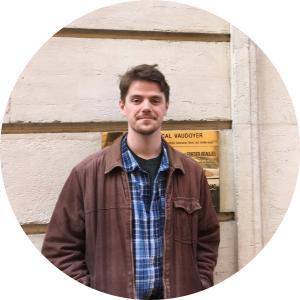 Liam is a third year in the College, studying History with a minor in Cinema & Media Studies. Outside of the classroom, he is involved in University Theater and a proud member of Hitchcock House. If you need to find him in a pinch, your best bet would be checking the campus coffee shops (especially Hallowed Grounds).

At the University of Chicago, academics are an important part of everyday life. No matter what your academic interests are, the campus libraries are a huge part of the UChicago ecosystem. From a devoted in-the-library studier, here’s a quick rundown:

Known better by its nickname, the Reg is the main library of the University of Chicago. Completed in 1970, the seven levels of the Reg feature progressively quieter study spaces as one ascends. I’ve often gotten (metaphorically) lost in the stacks and have spent many rainy days slouched in one of the large armchairs dotted about the building. The Reg also features one of UChicago’s student-run coffee shops, Ex Libris, on the first floor. Ex Libris keeps some of the latest café hours on campus and is a lifesaver during finals week!

The John Crerar Library is the primary science library of UChicago, featuring extensive collections and innovative multi-use spaces. The library is home to the Department of Computer Science and features a groundbreaking 20,000 square-foot collaborative space on the ground floor. There’s even a 3-D printer (and I keep telling myself I’ll use it someday). Crerar is a fantastic study space for those whose classes require intense focus and unique resources. The lower level of the building is extremely quiet—I love to head there when I need to churn out some concentrated work.

Designed in the late 1950s, the D’Angelo Law Library is a beautifully ahead-of-its-time building designed by Eero Saarinen. Located just south of the Midway, D’Angelo includes a gorgeous reflecting pool and has enjoyed multiple renovations over the years (most recently in 2008). Though it’s more regularly populated by graduate students, undergrads who prefer a serene setting for their academics will find D’Angelo to be a perfect fit. (I can personally vouch for the fact that it’s also a beautiful sight to walk by.)

Perhaps the most secret library on campus, Eckhart is tucked away in Eckhart Hall, the home of the Math Department. Dating back to 1930, the library is home to 13,000 volumes on mathematics, computer science, and statistics, which can all be returned in the collection bin outside the building. The space is unassuming, yet cozy, and has the advantage of being in one of the Main Quad’s prettiest Gothic buildings. Should the need for caffeine strike, Eckhart is only a stone’s throw away from Reynolds Club and the two cafés (Pret and Hallowed Grounds) located within. Even if, like me, math isn’t your preferred subject, Eckhart is definitely a good spot to know!

The Social Services Administration Library is another graduate library, again located south of the Midway. Situated in the SSA building at 60th and Ellis, the SSA Library is a triumph of mid-century design. With comfortable couches and plenty of natural light, SSA is a great mid-day study spot.

Opened in 2011, the Joe and Rika Mansueto Library is one of the most unique buildings on campus, and perhaps even the world. With its striking design—that, yes, looks like a big glass egg—Mansueto is an easily identifiable symbol of campus. Any studying must be done in the strictest silence—you can easily hear a pin drop. As an extension to the Reg, Mansueto also has the benefit of being right by the stacks and the aforementioned Ex Libris café. The glass ceiling makes Mansueto a particularly beautiful study spot on a rainy or snowy day. There’s also a giant robot arm that’ll grab your books from a subterranean stash. And hey, you didn’t hear it from me, but Mansueto might be an even better place to procrastinate than it is to study.

Is it playing favorites to say we were saving the best for last? Yes, but I’m writing the blog post and it’s my favorite.

William Rainey Harper Memorial Library! Named for the first president of the University, Harper never fails to make an impression on visitors, thanks to its gorgeous Gothic appearance (it’s often called Hogwartsian). Though Harper’s books were moved to the Reg in 1970, the building is still a hub of scholastic life at the university. The super-quiet main reading room is regularly packed with students and features the coziest armchairs on campus, while Harper Café is another student-run coffee shop that can provide the boost necessary to avoid drifting off in the middle of reading or completing a problem set!

There you have it, the Uncommon Libraries of UChicago! Just like the students they serve, each library is completely unique. And you really can't go wrong by using any of them as a study spot!