Why the best "college towns" are big cities

One of the world’s top museums, the Second City, eight professional sports teams, Navy Pier, 601 parks, a mile-long shopping experience, 26 miles of public beaches, and classic American architecture make up merely several of the countless attractions the city of Chicago has to offer. No matter who you are, who you want to be, or what you want to do, Chicago has something for you. For help digging into Chicago’s numerous opportunities, check out our recommendations below.

Recently named the top museum in the world by TripAdvisor.com, the Art Institute hosts one of the largest and most diverse collections on the planet. Featuring one of the most impressive collections of Impressionist and Post-Impressionist art ever assembled, including several of Monet’s “Water Lilies” and George Seurat’s “Sunday Afternoon on the Island of La Grande Jatte,” (of Ferris Bueller’s Day Off fame), the Art Institute also has an expansive collection of Modern Art, which can be found in its new Modern Wing. UChicago students can frequent the Art Institute any day of the week for free with their UCID.

The Richard H. Driehaus Museum transports visitors to 19th century Chicago through the home of Gilded Age banker, Mayo Nickerson. Its galleries feature the works of celebrated designers such as Herter Brothers and Louis Comfort Tiffany. Here, you can experience the grandeur and luxury of historic Chicago.

One of the world’s largest contemporary art venues, the Museum of Contemporary Art is located in Chicago’s River North neighborhood, and showcases captivating exhibits ranging from pop art to interactive pieces. Grammy-winning ensemble Eighth Blackbird are the current artists-in-residence at the MCA, while also continuing their ensemble-in-residence position at the University of Chicago.

Located in Chicago’s Pilsen neighborhood, a hub of Latino art and culture in Chicago, the National Museum of Mexican Art features Mexican and Latino art and culture. It is the only Latino museum accredited by the American Alliance of Museums. UChicago students have the opportunity to visit Pilsen and the museum during O-week, when there are designated shuttles to various neighborhoods. Otherwise, Pilsen remains easily accessible by CTA throughout the year. 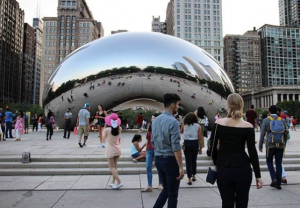 Get a crash-course in Chicago’s architecture in the best way possible—on a boat! Certified tour guides will give you an in-depth history of Chicago and how it grew from a small settlement into one of the world’s largest cities in less than 100 years. Get on board!

Located along the shores of Lake Michigan , Navy Pier is a Chicago cultural landmark. Each year, the pier sees millions of visitors who come to ride the 150-foot tall Ferris wheel, explore the Chicago Children’s Museum, or attend a show at the Chicago Shakespeare Theater. Throughout the summer, Navy Pier also puts on regular fireworks shows every Wednesday and Saturday night at sundown.

Belonging to the collection of American orchestras known at the “Big Five,” The Chicago Symphony Orchestra (CSO) is world renowned, both for its recordings (the CSO has amassed 62 Grammy awards) and its live performances. Students can get reduced price tickets to CSO performances with their UChicago ID.

Free or reduced price tickets to Chicago’s Opera House are available for UChicago students through their UCID. The Lyric Opera is one of America’s foremost opera companies, and has seen performances by such greats as Maria Callas, Luciano Pavarotti, and many others.

Known for being the first improvisational theater in the US, Second City has grown to become the world’s premier comedy club! Second City gave comedy greats like Tina Fey, Amy Poehler, and Steve Carell their start.

Founded in 1988 by Northwestern University graduates, Lookingglass Theatre Company has built a national reputation for being at the forefront of cutting-edge, ensemble-based theater. Throughout the Chicagoland area, Lookingglass maintains a strong community presence by educating and sharing its ensemble-based theater techniques with students and teachers through Education and Community programs. To date, Lookingglass’ work has been produced in over a dozen US cities.

Chicago’s oldest and largest not-for-profit theater, Goodman Theatre produces both classic and contemporary works in an effort to provide a voice to a wide range of artists. Further, the Goodman Theatre puts on cultural productions and programs that aim to positively impact the quality of life in Chicago.

Formerly referred to as the ImprovOlympic, Chicago’s iO Theater is another premier destination for improvisational comedy in Chicago. Since 1981, iO has used theater games to set up friendly and funny improv competitions between competing teams. Setting up shop in Wrigleyville, its first official home, in 1995, iO put on competitions and shows for almost twenty years before relocating to Lincoln Park in 2014, where it currently has four theaters, an expansive Training Center, and event spaces.

The Chicago Theatre is a landmark theater destination located in the heart of downtown Chicago. Since 1921, the theater has served as a performing arts venue for works including stage plays, magic shows, comedy, speeches, and popular music concerts.