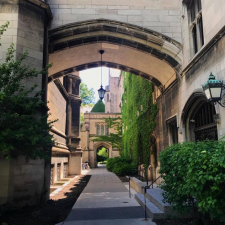 Visitors are encouraged to board the southbound #6 Jackson Park Express bus, which runs along State Street, to reach the University of Chicago via the CTA. Transit from the Loop to Hyde Park takes roughly 25 minutes, and single-ride, one-day, and multi-day passes can even be purchased prior to your arrival in Chicago. Exit the bus at 57th Street and Stony Island Avenue. Walk west on 57th Street, toward the train overpass, and continue for about seven blocks until you get to the main campus. Use this map as you walk onto campus, and look for the maroon and white UChicago flags in front of Rosenwald Hall.

The #192 express bus from Roosevelt Station and the #2 bus are also quick options for reaching Hyde Park from the Loop. Be sure to check the CTA Website for bus schedules and more information.

The Metra Electric commuter train, a separate train from the CTA system, can be boarded at the Millennium Park/Randolph, Van Buren, or Roosevelt stations. Transit from Millennium Park to UChicago takes roughly 20 minutes on the Metra. Exit at the 57th Street stop and walk six blocks west on 57th Street towards the main campus. Use this map to locate the admissions office, and look for the maroon and white UChicago flags in front of Rosenwald Hall.